The Deep Rock Galactic update 34 can now be downloaded. We do not yet know whether a comparable update has been released for Xbox players.

Elite enemies are tougher, faster, more dangerous versions of the standard bugs that you already know and love (to kill). They have a small chance of appearing in regular missions at Hazard Level 3 and above, so consider it a special occasion when you encounter one!

New dangers have been discovered in the caves!

Missions with this Warning will have a sure-fire chance of you encountering elite enemies.

A tsunami of swarmers awaits you in the mines. Bring plenty of pesticide and bullets!

An innovation committee assigned by management has tried to answer the following question: ‘What novel and unique new initiatives can we introduce to boost company profit?’ After many ideation sessions, workshops, and off-sites, they finally have the answer: Missions with two warnings instead of one! 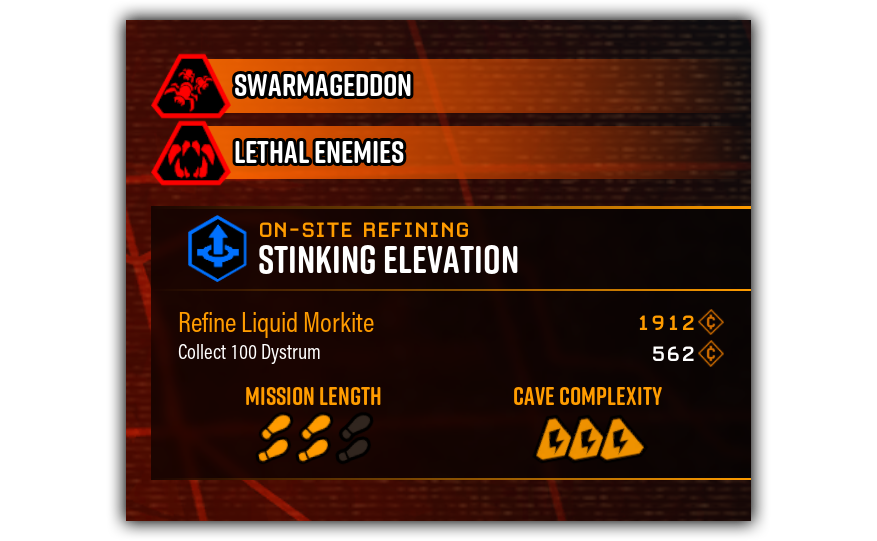 Gather a team of fellow miners and try your hand at this extreme challenge. Prove that you are the toughest among all miners and that you eat regular Single Warning missions for breakfast. Rock and Stone!

NB! Missions with double warnings are deemed so challenging that they have been excluded from Deep Dives and Assignments.

Are you frustrated with the current controller bindings? Do you feel that your mining performance could improve if you could just map the actions differently? Do you want more from your controller experience? Have we got some news for you! With the new option to rebind actions on your controller, you can finally get the unique layout that is just right for you.

How shooting is handled in terms of networking has been remarkably optimized. The result should be a more instantaneous response when firing projectiles. And projectiles now use much less bandwidth!

Now you have the option to manage different save game profiles if you’re playing with mods (or for any other reason of your choosing) so you can have a separate save for messing around. This feature was originally planned as a part of a larger modding support solution for this update, but we decided to postpone it and release it separately later. We are planning a more comprehensive and improved solution for letting mods into the main game and we will reveal more details as this project progresses. Stay tuned!

Note: We discovered an issue with the save game profile feature right before launch, we have disabled the feature for now but will enable it as soon as we introduce a hotfix for this.

The lads at R&D have been hard at work improving the balance of the weapons, overclocks, and mods in the game based on . Here are the changes: