miHoYo released a new update for Genshin Impact today. We have the full patch notes from february 3rd.

The Genshin Update 1.30 (PS4 version) can be downloaded and installed from now on. On the PS4, the file size is 7.9 GB, depending on the platform.

〓Compensation〓
1. Maintenance Compensation: Primogems ×300
(60 Primogems for every hour the servers are down)

〓Update Schedule〓
Update maintenance begins 2021/02/03 06:00:00(UTC+8) and is estimated to take 5 hours.
(Note: Precise timings are subject to change. Players may also experience disruption outside of this period.)

〓How to Update Game Client〓
PC: Close the game, open the Genshin Impact Launcher, and click Update.
iOS: Open the App Store and tap Update.
Android: Open the game and follow the directions on-screen. (Alternatively, you may open Google Play and tap Update.)
PS4: Highlight Genshin Impact from the PS4 Home Screen and press the OPTIONS button > Check for Update.
Please do not hesitate to contact Customer Service if you encounter any issues installing the new version. We will do our very best to resolve the issue swiftly.

During the event wish “Invitation to Mundane Life,” from after the Version 1.3 update to 2021/02/17 15:59:59, the event-exclusive 5-star character “Vigilant Yaksha” Xiao (Anemo) and the 4-star characters “Kätzlein Cocktail” Diona (Cryo), “Uncrowned Lord of the Ocean” Beidou (Electro), and “Blazing Riff” Xinyan (Pyro) will have their Wish drop rates greatly increased!

II. Rate-Boosted Characters
5-Star Character “Driving Thunder” Keqing (Electro)
◇ Vision: Electro
◇ Weapon: Sword
◇ The Yuheng of the Liyue Qixing. Keqing has much to say about Rex Lapis’ unilateral approach to policymaking in Liyue — but in truth, gods admire skeptics such as her quite a lot.

III. New Equipment
◇ Primordial Jade Cutter (5-Star Sword)
◇ A ceremonial sword masterfully carved from pure jade. There almost seems to be an audible sigh in the wind as it is swung.

*During the event wish “Epitome Invocation,” from after the Version 1.3 update to 2021/02/23 15:59:59, the event-exclusive 5-star sword Primordial Jade Cutter and the 5-star polearm Primordial Jade Winged-Spear will have their Wish drop rates greatly increased!

◇ Staff of Homa (5-Star Polearm)
◇ A “firewood staff” that was once used in ancient and long-lost rituals.

◇ Lithic Spear (4-Star Polearm)
◇ A spear forged from the rocks of the Guyun Stone Forest. Its hardness knows no equal.

IV. New Events
Take part in Version 1.3’s flagship event, Lantern Rite, for the chance to obtain a free 4-star Liyue character of your choice!
◆ Gameplay Duration: 2021/02/10 10:00:00 – 2021/02/28 03:59:59
◆ Event Rules: No Original Resin needed to take part. During the event period, Travelers can claim a 4-star Liyue character of their choice in “Stand by Me.” Complete challenges in “Theater Mechanicus” to obtain Peace Talismans, which can be spent in the Xiao Market on rewards including Crown of Insight and a new namecard style “Celebration: Lantern-Light.” 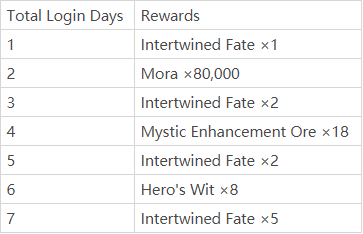 Five Flushes of Fortune
◆ Event Duration: After the Version 1.3 update to 2021/02/10 03:59:59 (Please notice that this event will start from 2020/02/03 04:00:00 on Euro and America Server.)
◆ During the event, Travelers can claim a Kurious Kamera from Ji Tong. Equip the Kamera and take pictures of specific targets to obtain photos of different colors. Collect photos of five different colors and exchange them for a Fortune Trove to obtain Primogems, Hero’s Wit, Mystic Enhancement Ore, and other rewards!

◆ More story quests are on the way, so please stay tuned!

2. New world quests
◆ A total of 26 festive World Quests will become available over the course of the Lantern Rite event, accessible from “Lantern Rite Tales” on the Events menu.
◆ A further world quest “Bough Keeper: Dainsleif” will also be added.

• System
1. Archive addition: Living Beings
Records information on enemies defeated and living things caught or discovered. Travelers can consult the Living Beings section of the Archive to view how many times they have defeated different enemies and also review tutorials for certain enemies.
2. New conversion function on Crafting Bench:
Combining some Character Ascension Materials with Dust of Azoth at a Crafting Bench lets you convert their Elemental Type.
3. Travelers’ profile pages now include Achievement progress and a Character Showcase.
4. Controller support added for devices running iOS 14 or above. Currently, the following controllers are supported: Xbox Wireless Controller (Bluetooth Version), Xbox Elite Wireless Controller Series 2, PlayStation DualShock 4 Wireless Controller, some other Bluetooth Wireless Controllers designed for iOS.
5. On the Weapon Enhancement screen, holding the selected material will add it rapidly.
6. A quick delete function has been added to the mailbox. Does not delete unread mail or mail with unclaimed attachments.
7. New photography method added for the PS4 version. Take a photo and save it to the PS4’s local storage in one single action.

2. Optimizes Mona’s Talent “Illusory Torrent”: When Mona is hit, she can use Illusory Torrent more quickly, as is the case with sprinting for other characters.
3. Adds a new idle animation for Kaeya.
4. Optimizes Zhongli’s animation under “Weapons” on the Character Screen.
5. Resolves issues with Aiming Mode for Bow-wielding characters when obstacles are present nearby, such as character shaking and off-center shots.
6. Optimizes precision when firing shots at moving targets.
7. Resolves issues of shaky clothing/movements when some characters perform actions such as walking, attacking, skill casting, and sitting.

• Monsters
1. Adjusts combat logic for Dendro Slimes: When a Dendro Slime is hiding relatively far from your location, you will not enter combat mode.

2. Deleted chats will not appear in the chat list.
3. Optimizes display order of chat column: After entering team setup in Co-Op Mode, the chat column will automatically switch to the team column.
4. Optimizes the display hierarchy when there are multiple overlapping icons on the Map.
5. Optimizes UI transparency on mobile devices upon entering Aiming Mode in the Spiral Abyss.
6. Optimizes the Kamera gadget for the PS4 version: When equipped, using the Kamera directly stores a screenshot with the UI hidden to the local storage.
7. From Version 1.3 onward, extra Fragile Resin rewards will be included in the BP system:
Starting from BP Level 5, Sojourner’s Battle Pass and Gnostic Hymn provide Fragile Resin ×1 every 10 BP Levels. The original rewards of Mystic Enhancement Ore provided at these BP Levels will be added to the rewards at other BP Levels instead, and the total quantity of Mystic Enhancement Ore that can be obtained from the BP system will not change.
8. Removes the Delete button from the Portable Waypoint interface of the open world map.
9. Optimizes the size of the Wind Glider on the Dressing Room screen for certain characters.
10. When using a controller, improves the refresh rate when switching between tabs in the Paimon’s Bargains section of the Shop.
11. Optimizes the experience of moving the crosshair in Aiming Mode when the frame rate is low.

• Other
1. Adjustment to the Geo Elemental Resonance “Enduring Rock”:
◇ Original effect:
Increases resistance to interruption. When protected by a shield, increases Attack DMG by 15%.

◆ Post-adjustment effect:
Increases shield strength by 15%. Additionally, characters protected by a shield will have the following special characteristics: DMG dealt increased by 15%, dealing DMG to enemies will decrease their Geo RES by 20% for 15s.

3. Amends the tab for the standard wish “Wanderlust Invocation.” *Only the tab has been changed. The Wish contents and rules remain unchanged.
4. Optimizes item source descriptions for Mist Grass Pollen, Mist Grass, and Mist Grass Wick.
5. Adjusts descriptions for the materials Fragile Bone Shard, Sturdy Bone Shard, and Fossilized Bone Shard and adds their sources.
6. Adds a description for the rules of Elemental Orb drops in the “Test Run” event (the actual mechanics in-game are not affected by this change).
*Note: In order to allow Travelers for a quicker use of Elemental Bursts and more efficient testing experience, the opponents on trial stages drop additional Elemental Orbs. However, due to our negligence, this effect was not individually listed in the event details, leading some Travelers to misevaluate characters based on their trial stage performance. We sincerely apologize for any confusion this might have caused. After this update, the event details will be supplemented with the relevant rules. We will continue to optimize the trial stage experience in the upcoming versions.
7. Adjusts the Stellar Reunion event as follows:
a. Adjusts the order of rewards in Passage of Time (total obtainable rewards remains unchanged).
b. Reduces the number of points required in Homeward Path to be eligible to claim the sword “Prototype Rancour.” Points requirement reduced from 700 to 500.
Scope of Impact: Travelers who activate the Stellar Reunion event after updating to Version 1.3.

〓Bug Fixes〓
• Quests
1. Fixes an issue affecting the PS4 version whereby during the story quest “Should You Be Trapped in a Windless Land,” Stanley’s movements during cutscenes are erroneous.
2. Fixes an issue whereby two Tea Master Liu Sus will appear under certain conditions.
3. Fixes an issue in the Story Quest “Traveler Observation Report” whereby some of Paimon’s voice lines are missing.
4. Fixes an issue with the archon quest “A Long Shot” whereby there is a small chance of triggering a Plunging Attack during the aerial battle with Stormterror.

• Domains
1. Fixes an issue whereby when temporarily leaving a Spiral Abyss challenge, Statues of The Seven can revive characters that have fallen in the Sprial Abyss.

• Audio
1. Fixes some issues with the Chinese, Japanese, Korean, and English voice-over.
2. Fixes issues with some character and environment sound effects.
3. Fixes an issue for controller users whereby some interface sound effects do not function properly.