Ubisoft and the responsible developers have released a new update for Hyper Scape today. Below are the full patch notes for this September 3rd update.

The Hyper Scape Update 1.11 can now be downloaded. On the PS4, the download size is 754 MB, depending on the platform, the size can vary. The update includes new features, improvements and bug fixes. 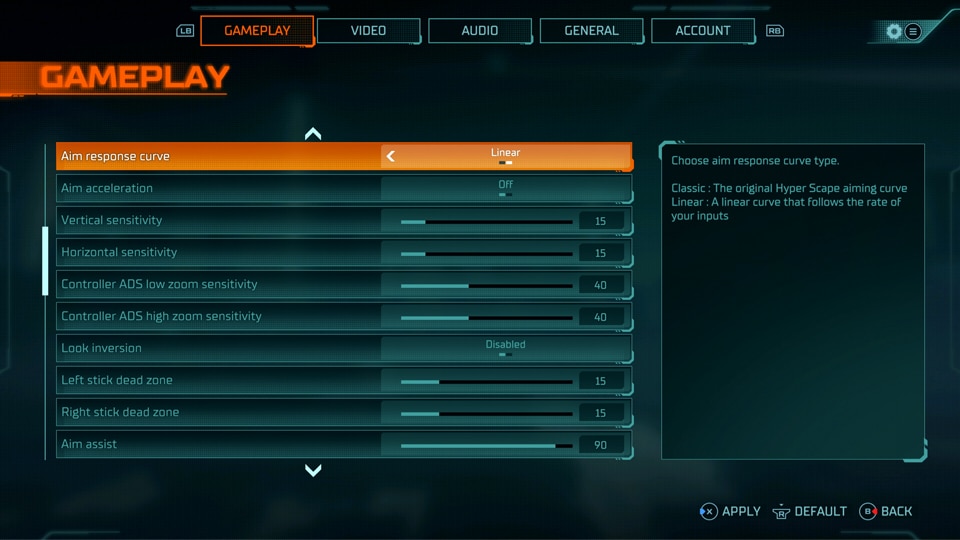 2 new settings have been added for Controller aiming:

DEVELOPER NOTES: Many of you, especially those playing on Console, asked for improvements on the aiming experience on Controller. We’re adding these new settings for all platforms to let you to better control the level of precision & inertia when aiming with the sticks. Choosing the Linear Curve will create a direct link between input and aim speed. Disabling Aim Acceleration will remove the inertia from your aim movement and create a more predictable aim.

If you felt uncomfortable with the Controller aiming so far, we recommend you try different settings to see which one works the best for you, starting by testing disabling the Aim Acceleration. Keep also in mind that your current Aiming sensitivity values can have very different impact depending on the curve you select.

NOTE: We’ve made additional improvements on aiming/sensitivity options, which you’ll find below in the Game Modes & Systems section below. 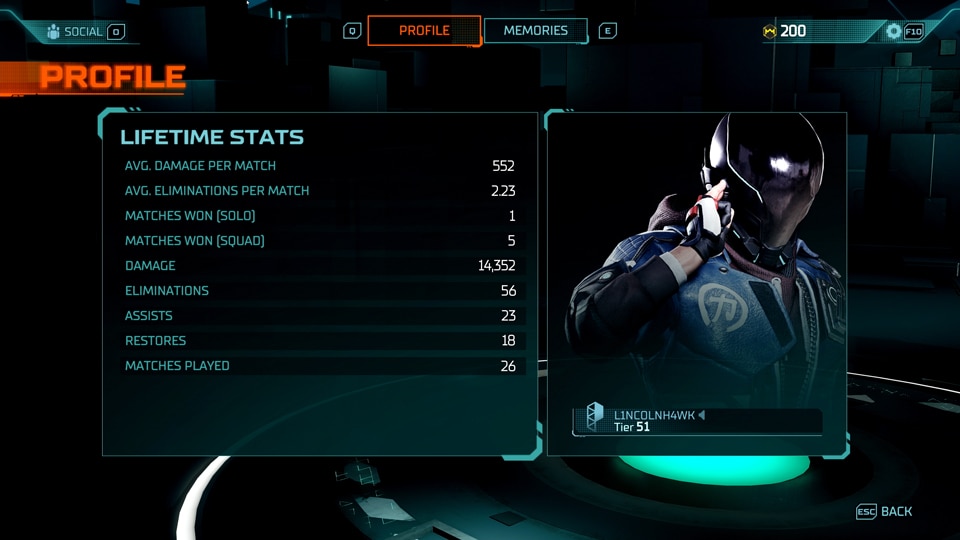 You can now access your PLAYER PROFILE & several lifetime stats from the HALL OF CHAMPIONS portal in the Hyper Scape HUB, in the Profile tab.

This is only the first step; we plan to expand this feature in the future.

PLAYER REPORTING FROM THE ELIMINATION SCREEN 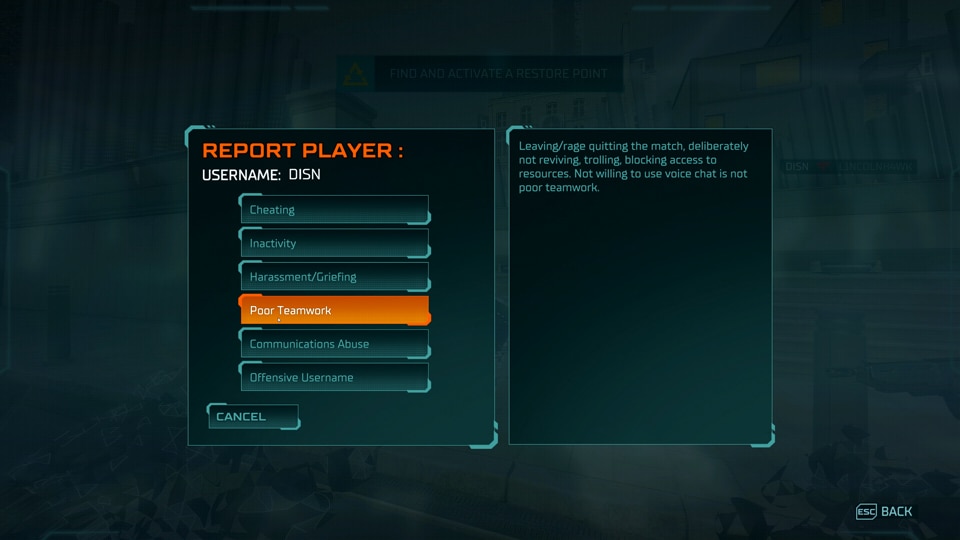 You can now REPORT PLAYERS from the Elimination screen.

DEVELOPER NOTES: This is an improvement from the existing Player Reporting functionality which was previously limited only to Squad members. Now you are able to report players who have eliminated you, if you have reason to believe they have been using cheats or acting disruptively in breach of the Contender’s Code.

DEVELOPER NOTES: The Hexfire was too present in the current Console meta. Reducing its clip size and level of aim assist should remove some pressure from opponents and make it a less obvious choice vs. other full-auto weapons. We will monitor closely if these changes are enough to improve the weapon balance and re-adjust if necessary.

DEVELOPER NOTES: The Mammoth was too efficient in term of kills & damage, especially on PC. We chose to adjust its damage but gave it a bit more clip size to compensate. This change should rebalance its impact vs. other close-range weapons like the Harpy and make it less of an all-purpose weapon. We will monitor closely the impact of this change on the weapon balance and re-adjust if necessary.

DEVELOPER NOTES: The Protocol’s damage will now decrease after 150m to prevent getting 1-shot killed by players located extremely far from the action. We’ve also added a Lens Flare when players are aiming with the rifle, to give warning to their potential victims. Both these changes should give more opportunities to escape or counterattack against snipers.

DEVELOPER NOTES: The Salvo is by far the least used weapon currently and we feel it has a lot to do with its unpredictability. While we do not intend to make it too powerful and spammy indoors, those changes should make it easier to use and less random when shooting in the direction of an enemy.

DEVELOPER NOTES: We have marginally reduced the damage of the Riot One, as it was starting to dominate a bit too much with a high level of efficiency as both an opening and closing weapon. The damage reduction is only 4-5% across all fusion levels with the goal to lower the overall damage output rather than changing the weapon behavior.

DEVELOPER NOTES: We received a lot of feedback from the community telling us the Crown bearer was too hard to beat, especially on Console. We confirmed there were indeed too many Crown victories in the game currently. The Crown is intended to be a tiebreaker during Showdown, not the main way to win a Crown Rush mode.

In patch 1.1 we have strongly increased the pressure on the Crown bearer in term of Hack cooldowns penalty and increased the victory timer. We are planning more improvements in the future to make sure the Crown does not get too easy to win while staying fun for all players.

DEVELOPER NOTES: The role of Aim Assist is to help provide a good experience to all players, not to make a specific controller type superior to another. Our data showed that on PC the weapon efficiency of Controller was a bit higher than Keyboard & Mouse, so its level of Aim Assist has been reduced. This is for PC controller only.

We know the topic of Aim Assist is important to many players and can be polarizing; we have always kept an eye on this mechanic and will continue to heavily monitor it in the future to insure the game stays fun for all our community.

The slider setting will also allow players to reduce the level of Aim Assist to the level they like instead of simply being able to turn it off.

DEVELOPER NOTES: Answering a big request from our PC players since Tech Test, this will allow Mouse & Keyboard players to tweak their sensitivity more precisely.

DEVELOPER NOTES: In investigating the overall aiming difficulty for Controller players, we found that the default sensitivity values were a bit too high. New players will now start with default values closer from the ones we see our community use & recommend. Existing settings will be unaffected.

DEVELOPER NOTES: Our streamers and viewers on Twitch told us the Kudos were not visible enough and were often missed. We’ve strongly reinforced their presence on screen to make sure viewers will feel their support does not go unnoticed, and to make streamers feel more awesome.

As before, the Kudos can be enabled/disabled by the streamers in their Extension options.

DEVELOPER NOTES: Once triggered in a match a Game Event won’t have a chance to trigger again until 3 other Events have occurred (rotation was previously 2). Seeing twice the same Event in a single match will now be rare. This should create more diversity for viewers and players and reduce such a feeling of repetition with the Events in matches.

• Fixed multiple crashes and improved the general stability of the game.